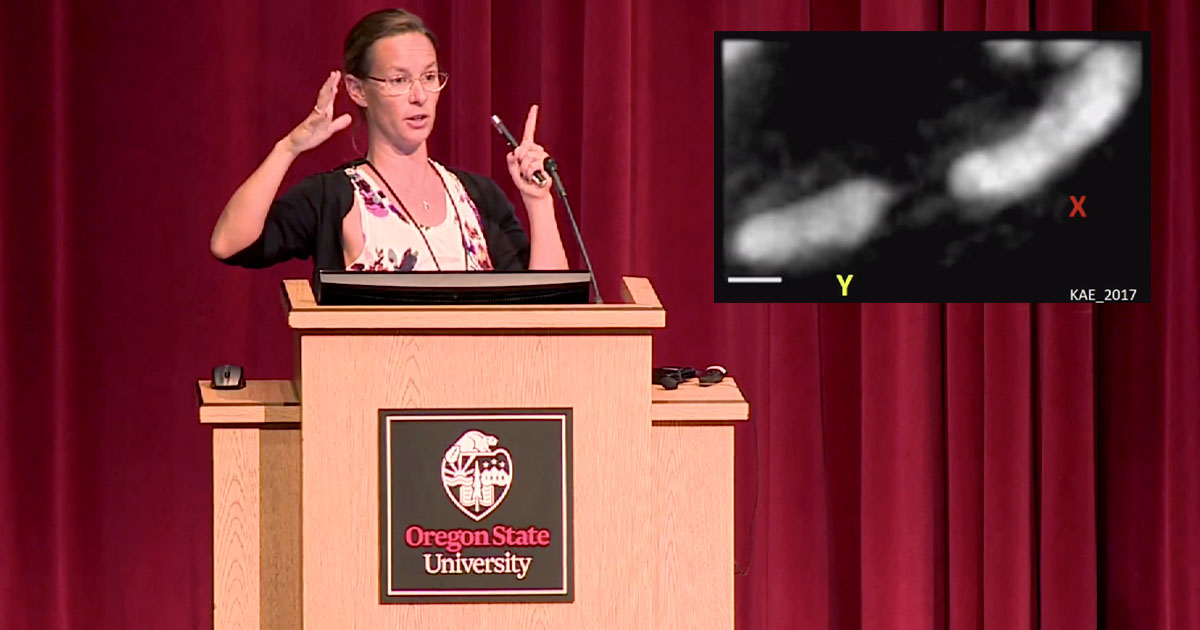 Better hops is equivalent to better beer. And with Hopsteiner’s support, Katherine Easterling, a Doctoral Candidate at Florida State University (FSU), discovered a genetic anomaly within domestic and wild hop plants that can be used to make new, innovative hops, which leads to better beer.

Over a year ago, Easterling embarked on a research project to understand the strange genetic phenomena discovered by Dr. Dong Zhang and Nicoli Pitra, scientists at Hopsteiner. Using skills and tools that were developed in maize by Dr. Hank Bass at Florida State University’s Department of Biological Science, Easterling has been working with Dr. Paul Matthews, Senior Research Scientist at Hopsteiner’s Crop Improvement Program.

This past summer, Easterling and Dr. Matthews presented the new findings at the International Brewers Symposium on Hop Aroma and Flavor that was held in Corvallis, OR. In addition to giving a clear and concise talk about the complicated sexual behavior of hop and showing exciting fluorescent movies of chromosome behavior in hops, Easterling won the poster competition for her presentations.

“Having our dynamic researcher working in a world-class maize laboratory was a perfect match for the dynamic complexity of hop breeding genetics,” said Matthews. “Dong and Nicoli’s statistical discovery, confirmed into real chromosome behavior in hop sex cells by Katherine, are revolutionary for hop breeding.”

What Easterling discovered, after having placed DNA strands from a male sperm cell sample under a laser fluorescent microscope, can only be described as a genetic mystery. At first glance, atypical whole chromosome shapes were observed. Then, at the late meiotic prophase, the chromosomes should have been paired in twos with donut-like shapes. What was discovered here, however, were chromosomes that were linked together in long chains and rings.

“This observation means that there is a sequence similarity that extends beyond the parental chromosome pairs,” said Easterling. “Although some plants and animals have been reported to demonstrate that type of chromosomal behavior, it’s considered very abnormal, and the offspring from such strange behavior can be less viable or show unexpected traits.”

“It is essential to understand the aberrant behavior in order to make substantial new progress in hop variety development,” Matthews added.

Easterling recently received the Godfrey Endowment for Botany Travel, which will allow her to go back out into the field next summer and collect wild hops to survey the extent of the genetic phenomena in nature.

“Hopsteiner’s support has allowed me to focus entirely on my research for the past year, and it has been quite an experience,” she added. “One thing that I love about working with hops is that the general public is fascinated by the plant, and, of course, the beer it makes! But, it also allows me to discuss many different topics – from molecular biology, meiosis, and cytogenetics, to environmental issues like climate change and conservation.”

Hopsteiner’s outstanding breeding program is known for creating agronomically superior hop strains with desirable characteristics that brewers seek to give unique flavors and aroma to their beers. The program was formed to develop new, top-quality, “grower-friendly,” disease-resistant, pest-resistant, hop varieties that defy comparison and are easier to grow. Using less plant protection material, water and land to produce a crop is a high priority. Many of Hopsteiner’s top performing experimental hop varieties from this program have become commercially available, such as the popular Lemondrop™, Eureka! ™, and X06277 hops.

Katherine’s discovery has the potential to push the hops industry forward, and may help to create new types of hops and beers in the future. If you are interested in learning more about Katherine’s research, you can read the full research report here. And if you want to learn more about Hopsteiner and our hop varieties, check out Hopsteiner.com.